We need to understand common patterns of behaviour and their causes for Deep Collaboration. We can de-personalise experiences and work better together when these behaviours can be recognised and talk about openly.

We will always make mistakes and ‘stuff things up’. Others will make mistakes as well. This is hard to accept when the work we are doing is important and the stakes are high. If we cannot admit we are wrong or have to ‘look good’ all the time, then we will struggle to be part of a shared space through Deep Collaboration.

Deep Collaboration requires us to accept these mistakes and not punish people for taking risks or not being perfect. We also need to understand how people in the group and our organisations treat mistakes as well. 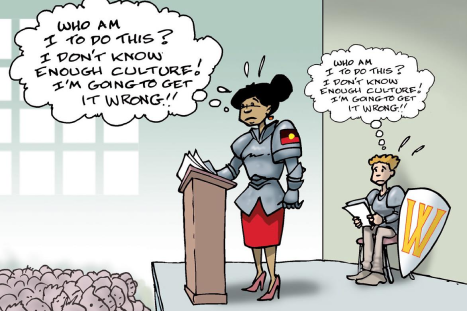 Understand roles in the group

The roles we take up in collaboration can include our positions, feelings and perspectives. These can be personal or professional. It is easy to hold onto roles and not be able to question them or even let them go when needed.

Roles are always in a group and can include: the victim, the saviour, the perpetrator, the oppressor, the person who always gets it wrong. We also act in several roles on a daily basis – sister, boss, peacemaker, activist. Try to recognise roles and speak about them in your collaboration.

It is also helpful to be clear on the purpose of the role you are taking up at any given time to enable progress rather than acting from our usual approaches. A role is a bit like a hat – what hat are you wearing while you are speaking now? Is it helping the group create a new way of working or holding the group back in old ideas?

Grant and Liz discuss the different types of roles that you are likely to see in this work, based on their experiences.

There are five key roles or behaviours that we have noticed arise when First Nations and other Australians come together to collaborate. These are:

Other people’s power and legitimacy is questioned and undermined. New ideas and suggestions are targeted and rejected. No-one in the group is able to move forward because something or someone is missing.

For First Nation peoples, this could be an internal voice that says "sit down and stay quiet" or questions over who can speak for community and country.

For non-Indigenous Australians, it could be around expertise, qualifications or formal leadership roles in organisations.

When gatekeepers are allowed to take over, nothing moves forward because no-one has permission to suggest and create anything new.

"Who are you to do this?" Grant and Liz discuss the common dynamic of 'The Gatekeepers', how it appears and what you can do.

The pressure that this places on one person is immense and it is based on a false fantasy that every First Nations person understands everything about all Indigenous culture, history and society. It also presumes they have the authority to speak about and represent all First Nation peoples and communities. This is based on false ideas of all First Nations cultures being homogenous.

Other fantasy leaders may be non-Indigenous people who are well connected or have built up trust within an Indigenous community.

Ultimately, the fantasy leader role can easily be criticised from all sides and it removes the focus on finding real representatives to bring into the group. No-one can carry this pressure and the group will fail to get what it needs.

"You're the person we've been waiting for". Grant and Liz discuss the concept of the 'Fantasy Leader', how it appears and why its' unhelpful for everyone.

Complaining, avoidance or denial can be signs of resistance associated with this role. They come from fear of change and can sometimes be based on cultural objections. This is different from people raising cultural concerns as a legitimate part of creating a shared understanding.

Non-Indigenous people can accuse First Nation peoples of being ‘too sensitive’ or ‘difficult to engage’ when they challenge accepted ideas and worldviews.

First Nation peoples can also accuse non-Indigenous people of being ‘insensitive’ or ‘acting like colonialists’ when they challenge their ways of doing things.

‘Playing the Culture Card’ stops the discussion and prevents further exploration. When cultural objections are raised, this is an opportunity to understand and explore, rather than as a way of ending the conversation.

"You're not culturally competent". Grant and Liz discuss the concept of the Culture Card - how and why it appears, and how to work with it.

People may say things like ‘This will never work’, ‘You don’t know what you are doing’, ‘You don’t represent us’, ‘We have already tried that’, and ‘Who are you and what do you know anyway’. These statements can be backed up with examples of other times collaboration failed or with accusations against the individuals involved. However, often the biggest killer critic is a voice we hear saying these things inside our own head.

The killer critic can stop progress and silence the group. This role can come out when people are threatened or feel vulnerable about change. It can also come out when we lack hope or level of trust in ourselves and the process.

The key is to not let it stop us. What exactly is its feedback? Take on board any learning and wisdom from the critic to provide the courage and skill to continue to move forward. Sometimes, revisiting shared values, purpose and language can help break the impasse.

"I don't think I can do this". Mark and Jane discuss the symptom of the 'Killer Critic' and how present it is in this work, how everyone feels it, along with ways of working with it on your own and with your collaboration.

When there is conflict and difference, one of the responses is for people to retreat and disconnect from others and ‘go back to their trenches’ or comfort zones.

Sometimes this is when we fall back onto our old views, assumptions and worldviews. Sometimes it is useful, knowing when it is time to recharge, a tactic so we can feel safe again.

If you find this has happened, ask yourself why and how did we get here? What does the group need to venture out again and re-engage in the collaboration?

Reconnecting to purpose and common ground may be required to re-establish safety.

Grant and Liz discuss the key dynamic of 'The trenches' and how it played out for them in their collaboration.

Some roles in groups are felt but not seen. These are called ‘ghost-roles’.

Ghost roles are generally roles that we don’t think should be there, but are. They may not be mentioned – a bit like the elephant in the room metaphor – or they may be mentioned repeatedly although not obviously present. For example in working in collaborations with First Nations and other Australians, the ghost role of ‘colonisation’ is often present but very rarely talked about.

Start to look for, name and speak up about ghost roles in your collaboration as roles that belong to the issue you are talking about.

Roles often come in opposite pairs, so if there is a victim, know that there will likely be a ghost role of a tyrant as well. Bringing in ghost roles by speaking personally from the heart can help the collaboration come together.

Ghost roles in a group

What is a ghost role? What are some signs that one is around? Mark, Jane and Grant discuss ghost roles in a group and how to spot them.

Drawing the Roles in the Room

Grant and Liz discuss the different types of roles that you are likely to see in this work, based on their experiences.

Who are you to do this? Symptom 1: The Gatekeepers

"Who are you to do this?" Grant and Liz discuss the common dynamic of 'The Gatekeepers', how it appears and what you can do.

"You're the person we've been waiting for". Grant and Liz discuss the concept of the 'Fantasy Leader', how it appears and why its' unhelpful for everyone.

"You're not culturally competent". Grant and Liz discuss the concept of the Culture Card - how and why it appears, and how to work with it.

"I don't think I can do this". Mark and Jane discuss the symptom of the 'Killer Critic' and how present it is in this work, how everyone feels it, along with ways of working with it on your own and with your collaboration.

Grant and Liz discuss the key dynamic of 'The trenches' and how it played out for them in their collaboration.

The Deep Collaboration Platform is part of Platform C which provides information and tools on stages and phases of cross sector collaboration to create the conditions for systems change.